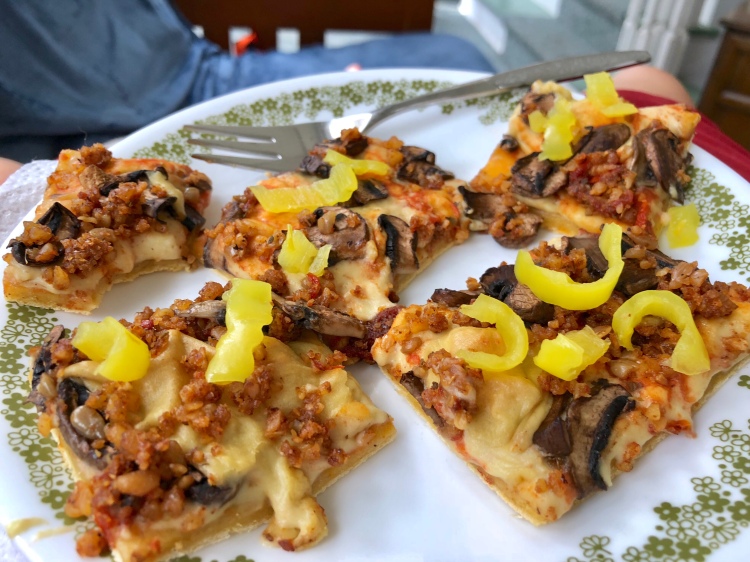 I think pizza is one of the top five things that people say “I could never give that up…” when we tell them that we’re plant based. But we actually haven’t given it up. I mean, we did, for a while. But then we started putting together our own recipes and we realized we could totally make a plant-based pizza and it would be amazing. (For the record, we didn’t know it would be amazing at all. We were totally scared to even try it at first. Plant-based life is a lesson in flexibility and learning).

But as it turned out, our first pizza was pretty good. With some tweaking, we’ve turned it from okay to phenomenal aka the worlds best plant- based pizza. Don’t believe me? Come over for a slice! Or, make your own! And if you have something better that’s also WFPBNO, please enlighten us because we’re always up for new ideas.

In our house, we don’t do gluten. I physically cannot and everyone else is along for the ride by default. They are good sports about it because it makes me so sick. So we came up with a crust made from Besan, aka ground chick peas.We bought a huge bag on Amazon and it’s the perfect consistency for pizza crust. You can pick the pizza slices up and eat them in your hands no problem. This is my favorite gluten-free crust that I’ve found. If you don’t have gluten issues, you have a lot more options available to you.

Combine dry ingredients together. Warm milk in microwave for 20 seconds or leave on counter for 30-45 minutes prior to starting so it’s room temperature.

Pour milk into dry mix and blend with wooden spoon.

Form into a ball of sticky dough, adding more milk a tablespoon at a time until ball is formed.

Lightly flour a large piece of parchment paper and your rolling pin. (I use millet flour because of not being buddies with gluten)

Roll dough until a thin (1/8 inch or thinner) crust is formed.

Shake off excess flour and carefully transfer crust off of parchment paper and onto a pizza stone.

I would assume this would work fine on a cookie sheet but I am going to tell you right now that I’ve never tried it that way. I’m actually going to buy another pizza stone because every time I make this pizza, it’s GONE right away and I want leftovers. And pizza stones really are that magical so I’d suggest you just invest in one with the money you won’t be spending on delivery pizzas…

We tend to use our own red sauce that we make quite simply from our garden tomatoes. Recipe HERE is you are interested. Otherwise, any store bought compliant spaghetti sauce will work. We love the Aldi’s Organic spaghetti sauce because it’s all veggies and no oil. But read your labels and you should find sauce that works for you.

In our house, we don’t really do bagged vegan cheeses because they are mostly oil and fillers and non-food, aka things we are trying to avoid. We’ve found about a million different “cheese” recipes on the web, made out of everything from potatoes, coconut milk, nutritional yeast and cashews or hemp seeds. This recipe is our standard favorite and it works perfectly for pizza. We also love it as a topping for oven roasted potatoes.

Mix in blender until smooth and creamy.

Stir with spatula continuously just until it starts to thicken. As soon as it begins to thicken, takeoff heat and continue to stir until it’s a consistent creamy mixture that stretches and will spread easily.

(Do NOT over cook or it will be too thick to spread onto the pizza. Much better to take it off the heat too early than too late.)

After putting your crust on the pizza stone, spreading your sauce and then your cashew cheese sauce, finish it off by loading up on your favorite toppings.

Bake at 400 degrees for 15 minutes or until cheese and crust just begin to get golden brown.

We keep pizza simple and add some sliced mushrooms, lightly sautéed in a little water and garlic, some banana peppers (from a jar or fresh) and some walnut/sun dried tomato “chorizo.” But add olives, peppers, onions, artichokes, pineapple or whatever you like. Our kids like just the spaghetti and cheese sauces and that’s cool too.

Michelle Baade is a writer and photographer from Wisconsin. Michelle about empowering women, often with unique family dynamics (and sometimes with a dash of realism) to show that we are all more alike than we are different, and that there is no such thing as normal. Michelle hopes to open pathways for communication around hard things where women have historically been encouraged to stay silent. Michelle is the mother of four, a wife, a grandma, and owner of the world's coolest old house. View more posts